The announcement earlier this week that two-time defending Horse of the Year Wise Dan had suffered a leg fracture caused a collective gasp throughout the world of Thoroughbred racing. There is no more admired creature—human or animal—in the sport. He’s the subject of a new advertising campaign that identifies him as “the most interesting horse in the world” and few people would disagree with that description.

To be sure, there are those who think Wise Dan doesn’t qualify as Horse of the Year, at least this year, since he’s been limited to mile races on the grass. Never mind that Frankel, the European horse of the decade, was equally specialized, as was Goldikova, the European horse of the previous decade. It’s an old debate. Is the Horse of the Year the one who would beat all others at the American classic distance and surface—10 furlongs on the dirt? Or is it the horse who most dominates his or her division, or the one who most captures the public imagination, or the one who best personifies (horseifies?) what it means to be a Thoroughbred? I am a supporter of the latter definition. In fact, years ago when I had a vote for Horse of the Year, I voted one year for the steeplechaser Flatterer.

Wise Dan certainly qualified the last two years by that second definition. This year I would argue the same. He won his first two races, then underwent colic surgery. His abdomen was cut open in May. In August he was back on the racetrack at Saratoga, winning a major race in superb time. On October 4 he easily won the Shadwell Turf Mile at Keeneland against a fine field, in spite of a terrible start. His season would be admirable for a four- or five-year-old. Wise Dan is seven.

Now we have the terrible news of the fracture. There are two positive aspects of this injury, even though it came just a few weeks before Wise Dan’s try for a third straight Breeders’ Cup victory. The most interesting horse in the world had the sense to limp just a little, so the fracture was first noticed while he was walking in the stable area, not at 30 miles per hour on the race track. And the fracture as discovered was minor, just a little saucer fracture of the lower cannon bone. Because of this, trainer and owner are talking about a month or two off and then a possible return to training.

Please, no. He’s a seven-year-old horse whose injury tells us that perhaps he’s had all the racing his legs will allow. What Wise Dan has done for racing could be undone in a second on the track. A catastrophic breakdown by any horse is a tragedy but if it happened to Wise Dan it would be beyond bearing. Here’s a look at Wise Dan headed to saddling enclosure in August at Saratoga. A horse hasn’t caused such excitement at the venerable racetrack since Rachel Alexandra’s appearance in 2009 when she sealed her Horse of the Year honors in the Woodward. 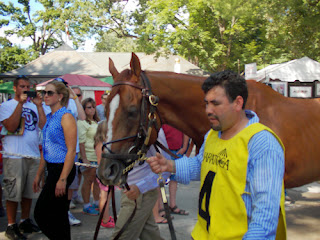